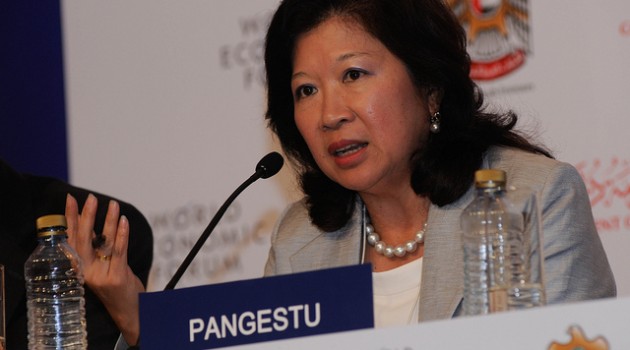 A seasoned minister who has served at the helm of both the Ministry of Trade and the Ministry of Tourism and Creative Economy, Mari Pangestu carved out a career as a no-nonsense policymaker who favoured facts and figures over political ties and rhetoric.

This Q&A was first published by the Knowledge Sector Initiative in Jakarta.

Mari Pangestu is not your typical policymaker. She has used her background in academia, hard work, and her unflagging curiosity to develop her approach. Her path as a policymaker hasn’t always been easy, but it’s always been clear.

In this first edition of the KSI Interview Series, Mari discusses her academic roots, her love-hate relationship with the “Ivory Tower,” the art of engaging the media, and of course, evidence-based policy.

I came from a background where I did a lot of policy studies before I became minister, so of course I believe strongly in evidence-based policymaking. Approaching policymaking as an academic is quite different from approaching it as a policymaker. It was a privilege and a golden opportunity to become a minister and be in a position where you can see how evidence based policy studies fit into your policy-making. I still believe in using evidence and I used it in the way I prepared policies in the different ministries. You have to map out all the interests and be clear about the objectives of the policy, find the facts and figures and identify the stakeholders. Then if you have to face Parliament or present to the Cabinet, it helps to frame your arguments. You have to be able to say “This is what the numbers show you, this is the objective, and these are the different options.”

You have to outline two or three policy options—with clear costs and benefits politically.  And as a minister it was always important to me, as well, to think about how we were going to take the policy and present it to the media. The media plays an important role as well.

Q: Can you talk a little more about how you see the media playing a role in influencing more evidence-based policy?

I was used to dealing with the media before, but it is different once you become a minister. That was a big learning curve for me. When you are a minister whatever you say is policy, so you have to be careful about what you say and how you say it. This is where evidence comes into play. That’s why numbers and figures are very powerful. I relied a lot on evidence; otherwise I don’t think I would have survived.

Q: You mentioned that you’re not a typical policymaker. Does that mean that there might be policymakers out there who are not relying on evidence and research?

I think a lot of research divisions in ministries are not priority divisions. Whereas if you come from a research background, or if you are making decisions that affect a lot of people—like finance ministry or trade ministry or planning ministry—than you need to have a strong research division within your ministry to be able to do the analysis because your policy will have an impact on so many people.

When I was a minister we consciously found ways to improve the capacity of the research division to deliver and support the other units. Having been on the outside, and working as a consultant to ministries, you learn that a lot of the studies are just put on the shelf because the studies are not linked to the needs of the units and ministries creating policy.

Q: What makes for a trusted source when it comes to the evidence and research policymakers can use? Do policymakers see researchers as reputable sources?

With regard to economic policy, Indonesia has a long history of using research. It dates back to the role of technocrats in government. I did a lot of studies on reforms before I became minister, and found that the earlier technocrats, like the so-called “Berkeley Mafia,” did something very clever: they would ask the same question to two or three researchers. They would ask different researchers and consultants from the World Bank, think tanks and universities the same questions. And then it was up to them as policymakers to figure out what worked best for Indonesia.

I did a similar thing when I came into my ministry. I utilized my network, including academics from outside Indonesia. I knew a lot of the donors so we sought out advice from the usual suspects—the foreign donors and the technical assistance from donor agencies—and we also used in-house researchers, as well as domestic universities and think tanks like CSIS or University of Indonesia.

Q: At the higher-level ministry meetings are there ever discussions around how much evidence is really part of the policy being created?

At the Coordinating Ministry level there is room for discussion. I used to work a lot with the Coordinating Minister for Economic Affairs and all the deputies because we were preparing for the policy and creating that early buy-in and ownership. Ownership is very important. A top-down kind of “Here are all my ideas…here’s all the evidence…take it or leave it,” just doesn’t work. And you have to be sensitive to territorial issues. Check and make sure you aren’t stepping on the toes of other ministries and their portfolios.

Having an evidence-based approach also helps to identify whose toes you might end up stepping on, whether it is within the government or outside entities. You have to use your evidence to do a lot of prep ahead of the process. And you can still lose no matter how much evidence or prep time you have. You just have to be realistic about it.

If the policymaker is serious and committed to having good input as part of their policy then they have to allow the research to come in. And at the same time, as a researcher, you have to be willing to get your hands dirty. Researchers have to come in and sit-in on the meetings and try and understand the reality of the situation. Researchers need to know that whatever they are recommending it is playing into these constraints of government, constraints of people, and regulatory issues. You can’t just recommend “A” if it is going to conflict with other regulations.

Q: So the key is to provide options?

Q: Are the researchers usually trusted enough to be sitting in the room with the policy is being made?

It depends on the minister. I brought in a lot of my researchers into the negotiations because I needed them. In a trade policy negotiation, the researchers need to be able to crunch the numbers when the offers come in. They were sitting next to me in the negotiating room. Jose Rizal, who is now the head of economics at the Center for Strategic Studies (CSIS) was sitting with us in the room during the trade negotiations.

Q: In the next five years, how do you see research and evidence helping to create and support a broader and more resilient knowledge sector here in Indonesia?

Q: What skills and acumen do young researchers need to know to be able to connect with innovative policymakers?

They need to be out there. They can’t just sit at their desk reading—and from that think they can help make good policy. If your intention is to do policy studies you can’t just sit in the “Ivory Tower,” you have to be out there. You have to have a good understanding of what’s going on in your own country, as well as around the world. A lot of the time we tend to be inward-looking. But if you don’t know what is happening in the rest of the world you could be giving out-of-date advice. The world may be moving one way and you are moving the other…and by the time you figure that out it’s too late. Policy researchers need to attend international meetings, read international journals, and be aware of what is going on. You have to engage in dialogue and debate with other policy researchers from around the world. My international network helped me a lot once I became the Minister of Trade. You have to be out there. That is the only way you are going to be well informed and able to build the network you need.

Knowledge Sector Interview Series hopes to enrich the dialogue among key actors in the knowledge sector in Indonesia through this series’ monthly interview.