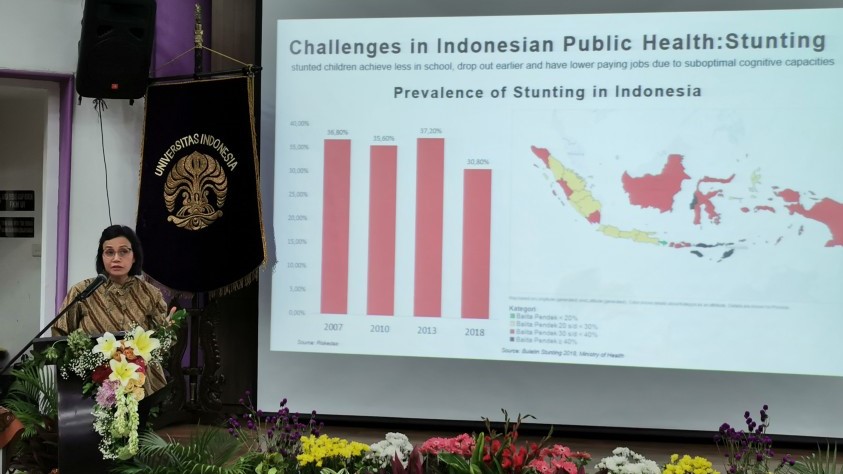 Indonesia’s Minister of Finance Sri Mulyani Indrawati posted this article to Linked In looking at Health as a strategic factor in boosting productivity and strengthening the labour market.

The Health sector is a crucial investment for human capital development. In the long term, it will promote economic growth and maintain fiscal sustainability.

To ensure that productivity in learning and working is not hampered by health issues, therefore it is crucial to have a good public health system in Indonesia. When public health is in dire condition and health problems occur within the general population, our human capital will not be able to reach its full potential.

Indonesia has made some progress in improving the public health system in the last 5 years, although some challenges remains and need to be addressed in an effective and efficient manner.

Stunting remains one of the gravest health problems faced by Indonesia today and can potentially hinders the improvement of our human capital. The World Health Organization (WHO) defines stunting as “impaired growth and development that children experience from poor nutrition, repeated infection, and inadequate psycho-social stimulation”. Children are defined as stunted if their height-for-age is more than two standard deviations below the WHO Child Growth Standards median.

The eradication of stunting has been made as one of the national priorities. This links directly to Indonesia’s human capital benchmarks. In the Human Capital Index issued by the World Bank, Indonesia scores 0.53 on a scale of 0 to 1, and ranked 87 out of 157 countries. The index in particular focuses on assessing the life expectancy as well as the quality of education and health to support productivity of future generations. Moreover, on the PISA (Program for International Student Assessment) Score for mathematics, reading, and general science, Indonesia is ranked 62 out of 69 countries.

It is no longer plausible to argue that health spending is purely consumption, but high-performance health spending is an investment that benefits the economy. Investments in health will build our human capital, increase workers’ skills and jobs, reduce poverty and inequality, improve efficiency and fiscal discipline, foster consumption and competitiveness, and strengthen health security.

The government has substantially invested in improving the condition of the national health system, this can be proven with the mandatory 5 percent allocation of the national budget for health. Moreover, during the past 5 years the total budget spending for health has increased substantially. In 2014, the budget for the health sector amounted to Rp59.7 trillion, while in 2019 the budget has been increased significantly to Rp123.1 trillion –a 106.2 percent increase. In 2020, the allocated health sector budget will reach Rp132.2 trillion, which is 13 percent higher than this year’s budget.

This year, the health sector priorities include the expansion of the National Health Coverage recipient to 96.5 million people. This is followed by the continuous efforts in improving service affordability, effectiveness, and efficiency. There are also specific programs to reduce stunting in 160 municipalities, expanded from 100 municipalities in 2018. The government is aiming to reduce the national stunting prevalence to 24.8 percent by 2019.

By this year, the government will also continue to improve the quality of infrastructure and services in many First-level Health Services (Pusat Pelayanan Kesehatan Tingkat Pertama) all over Indonesia. This effort is implemented in close coordination with local governments since around Rp33.4 trilion or 27.1 percent of the National Health Budget is allocated for local governments. Furthermore, other government health sector targets in 2019 that are worth mentioning include reducing the prevalence of Tuberculosis to 245 per 100.000 person and the elimination of Malaria in 300 municipalities.

Next year’s allocated health sector budget aims at improving the quality of health spending in the regions and harmonization of central and regional governments’ plans for the development of public health facilities. The budget will focus on several priority areas, namely:

The government is adopting a holistic approach to human capital development in Indonesia. The health sector programs will use the life-cycle approach, starting when babies are born in Indonesia and will continue until they reach old age. These programs will also be synergized with other key priority sectors, such as education, social protection, and financial inclusion.